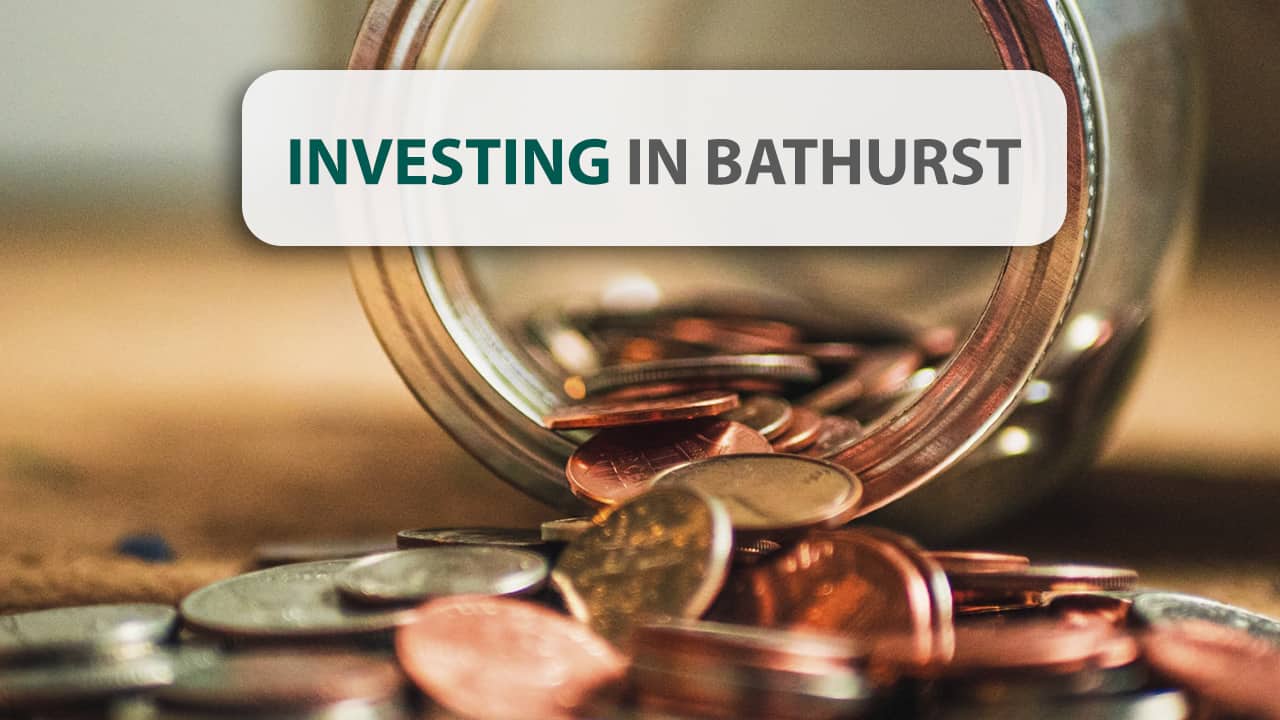 With a number of exciting major projects underway and being forecast to be one of the biggest centres in the Central West region by the 2040’s, investing in Bathurst now is a smart move.

Why Invest in Bathurst?

Less than a three-hour drive from the Sydney CBD, the Bathurst Region offers new and established businesses a strong and dynamic economic environment to support prosperity and growth.

Over 3,500 businesses call the Bathurst Region home, taking advantage of a wide range of transport options, easy access to Sydney and Canberra, and all the benefits of an attractive, vibrant lifestyle in an engaging, forward-thinking community.

The Bathurst region is currently home to around 45,000 people, and is projected to grow to a population of 58,600 by 2041, which will make it one of the largest population centres in the Central West Region.

Part of an interconnected workforce that includes Orange, Lithgow, Oberon, Blayney and Cabonne, the Bathurst Region has a total employment catchment of close to 75,000 workers.

In recent years, Bathurst’s strong population growth, recession-resilience, and tech focus have been the driving force behind major projects in the region.

Current and proposed major projects in the Bathurst region include:

In addition to the business opportunities in Bathurst, the residential property market has also seen drastic growth, with a growth of 20-25% in prices over the past 18 months. What does this mean? Well, if you play your cards right and build a quality home, when the time comes to sell it, there is the potential to see profits on the sale of your home.

Bathurst also offers great opportunities for work and family life, with a continually-growing economy offering more and more jobs, a plethora of sporting opportunities for people of all ages, parks, cafes, restaurants and much, much more.

Education is also an important aspect of life, especially in primary and secondary school. Luckily for you, the Bathurst Region is home to a Charles Sturt University (CSU) campus, a TAFE NSW campus, a SkillSet campus, five secondary schools, and 20 primary schools.

Think you need to live in a major city to have a career in technology? Think again – IBM is coming to Bathurst.

IBM – the International Business Machines Corporation – is a multinational technology corporation headquartered in Armonk, New York, USA. They produce and sell computer hardware, middleware, and software. IBM is also a major research organisation, holding the record for the most annual U.S patents generated by a business for 28 consecutive years.

IBM, CSU, and the NSW Government have announced a multi-year partnership to create a new IBM Client Innovation Centre (CIC), with its regional hub based in Bathurst. The venture will initially create 50 jobs, growing to around 300 jobs as the venture matures.

With more than $7 million invested in the Bathurst Aerodrome since 2016, a further $3.8 million is set to be invested over the next three years.

The Bathurst Aerodrome is serviced daily by Regional Express Airlines (REX), providing regular public transport (RPT) to and from Sydney. As one of the closest regional airports to Sydney, Bathurst Aerodrome is a popular destination among pilots, particularly trainees, from Bankstown and Camden Aerodromes.

The future investment in the Bathurst Aerodrome will include:

Bathurst will soon be home to a tier III, world-class data centre, which will be used by local businesses, universities and national enterprises to house their critical infrastructure and provide direct cloud access for their applications.

“We are excited to be bringing a new data centre to Bathurst which will boost the local economy while also creating jobs, driving investment in Bathurst and importantly, providing a metropolitan experience for the local community. By bringing data processing and the Cloud closer to the users, Bathurst has an incredible opportunity to grow as an Innovation Hub to power the Australian economy.”

The Leading Edge Data Centre is projected to be in operation by July 2022.

Approval has been granted for a new Quest and Business Centre on the corner of Bentinck Street and Howick Street in the Bathurst Central Business District (CBD), known by us locals as the “former Dairy Farmers’ site”.

The approved development will bring new life to the site, combining the rich history with modern architecture. The development is planned to include:

Learn more about the Bathurst Quest and Business Centre here.

The proposed development is a six level “one stop” integrated Medical Centre precinct on the currently unoccupied Clancy Ford site at 250 – 252 Howick Street, and an adjoining five level car park on the existing George Street site. The car parking available will increase from approximately 330 spaces to as many as 950 cars, hugely benefitting the Bathurst community and the many surrounding CBD businesses.

The Bathurst Integrated Medical Centre will be a privately funded project of approximately $70 million, creating a significant economic jobs boost during construction and beyond. The building when finished is designed to include facilities such as:

Bathurst Regional Council is currently running an Expressions of Interest Campaign for the adaptive reuse and redevelopment of the former TAFE Precinct located in the centre of the Bathurst CBD.

The iconic landmark building covers approximately 6,400 sq.m and provides an incredibly rare opportunity to add up to 6,500 sq.m of new floor area to the Bathurst CBD, as well as the endless possibilities provided by the adaptive reuse of the stunning heritage buildings on the site.

Bathurst Regional Council is seeking an innovative consortium of design and development expertise and private finance for the Project. This could include a private developer, development consortium and/or joint venture with Council.

Learn more about the EOI for the former TAFE precinct here.

The Gateway Bathurst covers 27 hectares and is located opposite the Bathurst SupaCentre in Kelso’s large format retail precinct, with significant frontage and easy access along the Great Western Highway.

Businesses already operational on the site include a Metro Petroleum service station, Oporto, and KFC.

Learn more about ‘The Gateway’ here.

The Master Plan outlines AJ+C’s analysis of the existing condition of the Town Centre and the outcomes of stakeholder and community engagements, to make several site or area-specific recommendations as well as Centre-wide master plan proposals.

The key concepts proposed by the AJ+C Master Plan that are supported by Council at a concept level include:

The Central West Pumped Hydro Project is in the early stages of project assessment and development. The site for the project is situated between Bathurst and Lithgow.

The project is planned to generate 200 employment opportunities during construction and 30 jobs on an ongoing basis. The project will require improvements to local telecommunications infrastructure, which is expected to improve coverage in the local area.

The Laffing Waters Master Plan has been developed to ensure an integrated ‘whole-of-community’ approach is achieved in its future development. The Master Plan seeks to:

The Master Plan proposes an opportunity for some 2,270 new dwellings, housing a population of approximately 5,200 residents. The residential density proposed by the Master Plan has been carefully considered to meet identified future demands.

The Laffing Waters community will be supported by a new school and vibrant Neighbourhood Activity Centre (NAC) with a new supermarket, speciality shops and opportunities for other business and community facilities and services.

As you can see, Bathurst is in store for some serious upgrades, giving the region a very, very bright future to look forward to.

Get In touch below. Ask Any Question or Start the Free Quote process.